Is Nessie an eel?

Recently, media outlets have carried the story that the Loch Ness Monster could have been all along, just a very large eel. The possibility has been suggested by the New Zealand Researcher Neal Gemmel who collected DNA samples from the loch to ascertain what species dwell there (see part one). Eel DNA was oft found in the samples:

While it is true that some eels have been recorded to grow to lengths of 12 to 19 feet, this hypothesis falls short of explaining the much larger 30 foot creature spotted in 1947 and numerous other Loch Ness Monster sightings. The eel does not sit near the surface of water with large humps sticking out of the water. According to the witnesses, Ness does not swim with the side to side movements of an eel but up and down. Nessie has also been reported to have legs or leg-like fins.

Enough credible witnesses have seen something serpentine of incredible size in and around Loch Ness to make us take the mystery seriously. New, gigantic and unknown sub-species of eel aside, there is a fantastic creature being reported. We have already explored the idea that witnesses are mistaken, so that leaves us with the possibility that Nessie is in fact, real.

But if she is “real”, what is Nessie?

I can’t say for sure but we might consider 4 alternative hypotheses to the eel (Warning: At least 3 of these are going to sound pretty far out!):

1. Nessie is a cryptid or species of dinosaur that somehow survived extinction.

Most are familiar with the idea Nessie is a dinsosaur species that managed to survive into modern times; the idea she is a plesiosaur. Scientists have long dismissed this theory as unlikey as cold-blooded reptiles like dinosaurs thrive in warmer climates; the frigid waters of Loch Ness would make an unhappy home for a dinosaur.

Yet new information has come to light:

Paleontologists from the Royal Belgian Instituition of Natural Sciences have unearthed a rich variety of dinosaur bones, including ceratosaurus and duck-billed dinosaurs, in the far northern reaches of Russia. At the time these dinosaurs existed, average temperatures would have been around 10 degrees Celsius. The scientists also found eggshells alongside the Artic dinosaur remains, providing the first proof dinosaurs were able to reproduce in colder conditions.

Other objections to the plesiosaur hypothesis includes large animals would not have enough to eat in Loch Ness and the animals could not raise their neck out of the water in the manner reported by Nessie witnesses.

But what if the creature finds food outside of the loch?

And what if Nessie were not a plesiosaur but another species entirely?

It might be a Zeuglodon. Dr. Karl Shuker, editor-in-chief of the Journal of Cryptozoology, has studied a Canadian Lake Monster nickname Shuswaggi and believes this Ness-like monster is a dinosaur-like ancestor of the whale. Shuswaggi dwells in a very deep glacial lake named Shuswap consisting of 4 elongated Ness-like bodies of water that are joined together. The creature sounds a lot like Ness:

“Zach happened to look down and saw a dark shape pass beneath him. It was long and serpentine but darted through the water extremely fast, like a fish or otter. Suddenly, a trio of dark humps cut through the water, shattering the glass-like surface of the lake. The creature did a sudden 90-degree turn to pass directly in front of Brown at a distance of 20 meters. A head rose from the water and turned toward the startled paddle-boarder; seemingly considering him with its unblinking black eyes”.

Incidentally, a woman who had a close-up encounter with another Canadian Ness-like monster thought to be the infamous Ogopogo said the creature was serpentine-looking but also whale-like:

It acted more like a whale than a fish, but I have never seen a whale that skinny and snaky-looking before”. 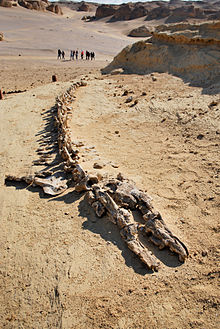 Skeleton of Zeuglodon B. isis at Wadi El Hitan, Egypt. These creatures are thought to be ancestors of the whale. Photo by Mohammed ali Moussa, CC BY-SA

Without a Nessie specimen to examine, we can’t be sure what “she” is. As with many cryptids, finding a lake monster carcus for scientists to dissect seems to be challenging. Could Dave Gemmel’s DNA analysis somehow have missed the existence of an unknown species? According to the video above,”professor Gemmel says over 20% of his DNA samples are still un-encoded”. So there still exists a good chance that Nessie represents a cryptid unknown to science.

Depiction of a “snaky whale” by Andrew Janson

2. Nessie is a creature from another age that sometimes experiences a time slip, briefly appearing in our present.

Time slips are temporary paranormal experiences that are said to happen to individuals who suddenly find themselves immersed in a different era. They will often observe other people in dress of that period, see buildings and objects belonging to that time and realize that something very strange has happened. Famous cases are reported over the world with those occurring in Bold Street, Liverpool, England being some of the best known. If individuals from our time can time slip, could this happen to a Zeuglodon-like cryptid from the Eocene?

3. Nessie is an emergent, materializing phenomenon connected to the human mind.

This is a possibility that might be explored by Jungian psychology (as in related to the work of Swiss psychologist Carl Jung). Jungian Synchronicity is characterized by the appearance of meaningful coincidences.

In this way, the coincidence of turmoil in the human mind might be somehow connected to the appearance of a monster in real life.

For example, the multiple Nessie sightings in the 1930s are somehow connected to the storm brewing in Europe of that era and the mental turbulence that was created by the punishing Treaty of Versailles and anger stirred by Nazism in Germany. A monster came into existence as something disturbing was happening in the minds of Europeans.

Another example is the monster mentioned in the Sting/Police song “Synchronicity 2”. The lyrics discuss the horror experienced by the family patriarch; daddy is living a hellish modern life with the gridlock of the morning commute, a chronically unhappy family and regular meetings with a boss that feel “like a humiliating kick in the crotch”. He knows that “something, somewhere has to break” and it does:

– lyrics from the song Synchronicity 2 by Sting

Here, the disturbance in Daddy’s mind coincides with the appearance of a Ness-like monster.

It is important to emphasize these things do not cause one another – the horror in daddy’s life is not causing a monster to appear. These events are just synchronous. Jung might say they are “acausally” connected. That is to say, beyond our everyday cause and effect assumptions about the workings of reality yet meaningfully connected.

In paranormal study circles, researchers sometimes discuss the possibility that whatever a person is seeing was actually a “tupla” or “thought-form” – a physical manifestation of a mind monster created by the observer.  This was an idea explored by researcher D Scott Rogo in his book, The Haunted Universe (1977).

4. Nessie is an ultraterrestrail creature that travels here now and then from another place or dimension via some kind of water portal.

Is it possible that the Nessie is something otherworldly that visits our realm now and then? In this way, Nessie is typical of Fortean phenomena like flying saucers, fairies and Mothman.

It is hypothesized there exist non-human intelligences that interact with our own through the appearance of bizarre phenomena that do not fit into what we might consider “normal” reality.

Manifesting a gigantic monster or UFO is certainly one way to get someone’s attention!

The crop circle is often thought to contain mathematical messages a higher intelligence is attempting to get across to humans. Like the appearance of Mothman, Ufos and Men in Black just before the time of the Point Pleasant bridge disaster, it is possible Nessie became active prior to World War 2 in anticipation of the horror Europe would soon endure. Perhaps the Mothman was trying to warn us of the impending disaster at Silver Bridge and 1930s Nessie was a harbinger of a monstrous Nazi Germany.

As the 2002 Mothman Prophecies movie does well to point out, it can be difficult to understand the motivations of Ultraterrestrails. They might not be trying to communicate with us at all.

H.P. Lovecraft wrote of gigantic monsters existing in far off alien worlds that might one day revisit the Earth to re-claim the planet for themselves. These creatures do not come here to help us. The brief appearance of a gigantic serpentine entity in a loch or lake might just be a monitoring exercise. Maybe when conditions on Earth seem chaotic enough, the alien monsters will invade. If you are lucky enough to see one of their “scouts” you might want to prepare yourself for the worst – monster attacks following World War 3.

Nessie is not a unique case. In fact, there are stories of similar water monsters all over Scotland. There is the Morag in Loch Morar, Muc-sheilch of Loch Maree and the Loch Shiel monster to name a few (see Wikipedia List of Loch Monsters).

Such lake monsters are not only present in Scotland but throughout the world! In the USA, there is Champ in Lake Champlain bordering New York state and Vermont. In Canada, there is Ogopogo in Lake Okanogan and in China, the Tian Shan monster. The list goes on. In fact, there are hundreds, if not thousands of Nessie-like lake monsters the world over! See List of Lake Monsters for just a sample. These creatures have been seen for a long time as evidenced by ancient myth and native folklore – for example, see Underwater Panther.

Also, let’s not forget that there are numerous reported cases and traditions describing serpentine river (see post on River Monsters ) and sea monsters!

So if Nessie-like creatures are being seen, what are they? Why haven’t scientists attained a physical specimen if Nessies are found all over the world?

My best guess is the answer lies somewhere between hypothesis 3 and 4. These things are not entirely physical but temporarily materializing here, perhaps reflecting the thoughts of a non-human intelligence. Similar to the way a magician materializes an object or beast through a summons or spell, the consciousness technology of the non-human intelligence might seem like magic to us.

We might think this non-human intelligence is trying to tell us something but most people who encounter paranormal phenomena are simply bedazzled by what they see. The so-called “message” is not always clear. But if there exists a synchronicity, a human might be able to derive the significance of such an experience as it is relevant to his or her situation.

Sightings of a monster might be explored in terms of context and the minds of those who are observing. Seeing a monster is beyond normal experience. It is almost as if something dream-like (or nightmarish) has entered our waking life. Like the bizarre symbolism present in dreams it might be worth considering the significance of the improbable. It might wake us to a greater reality.