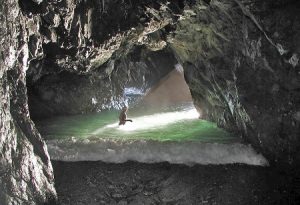 In 2016, I returned to the Island just a day or two after Cuban leader Fidel Castro died. Nine days of national mourning were declared and it was eerily quiet. This was a different Cuba from previous visits; the sounds of music blasting over the beach, drunken tourists fighting with their spouses and never-ending parties were noticeably absent.

There wasn’t a drink to be had so I went hiking. It was while walking through the Varahicacos Ecological Reserve, I stumbled upon the idea that sinkholes and caves might have set the stage for an underground civilization.

Stumbling is what you do in this park as the walking surface is a roughly broken-up, uneven coral. Just off the roadway you will find a large cave called Ambrosio with signs of human occupation dating back 2000 years. There is intriguing rock art and round window-like holes to the outside that appear on or near the ceiling:

“The cave stretches over 300 meters with 5 interconnected galleries and contains a total of 72 aboriginal rupestrian rock drawings that are representative of the Taino culture… They are thought to be more than 2000 years old, and is one of the largest collections of Indian pictographs in the Caribbean”. (from http://www.varaderoguide.net/cuevadeambrosio.html )

From the time of the Neanderthal and Denisovan, humans have utilized caves but I wonder if an entire civilization could have developed underground and more specifically, by the sea.

“It’s like going to to Pluto and seeing McDonald’s”.
– Japanese Researcher on finding microbes living more than 2 kilometers below the sea floor.

In my Archaeology 101 course, the professor mentioned that human civilization has grown up around wheat and agricultural crop production. But I wonder; previous to wheat cultivation, could there be an advanced ancient sea harvesting or fishing civilization? If so, did such a maritime civilization go underground?

There are some caves that open to the ocean while also stretching far underground. Places such the Blue Cave of Kastelorizo and New Zealand’s Rikoriko Cave are well-known. Even more remarkable, the Sac Actun watery cave system of the Yucatan is over two hundred miles long and contains artifacts dating back to the Maya:

Since caves are often carved out by water and water is the staff of life, it makes sense that some creatures call the systems home. The life of a cave environment is highly evolved to survive in the absence of sunlight.

“We know more about space than the underground waterways coursing through the Earth”.
-Jill Hein, Cave Diver, TEDYouth 2015.

Human Beings have a history of cave dwelling but I think there would be many survival challenges to being there 100% of the time. Humans can use caves as shelters but most of us have evolved and adapted to life on the surface. Despite the theories of a “Hollow Earth” people, Vitamin D from sunlight is necessary and a Earth surface mixture of nitrogen-oxygen is highly recommended for breathing.

An amphibious creature would be better adapted to watery cave environments. For example, in places like the Mammoth Cave National Park of Kentucky USA we find salamanders, toads, and frogs happily dwelling in the dark.

So to take things a few steps further; did an amphibious civilization evolve under the sea that now builds UFOs (or USOs)?

If so, it might not be a civilization of homo sapiens but a merman-like creature akin to the Babylonian Oannes and Sumerian Enki. In some cultures these creatures are credited with bringing civilization to man:

“Oannes (Ὡάννης) was the name given by the Babylonian writer Berossus in the 3rd century BC to a mythical being who taught mankind wisdom. Berossus describes Oannes as having the body of a fish but underneath the figure of a man. He is described as dwelling in the Persian Gulf, and rising out of the waters in the daytime and furnishing mankind instruction in writing, the arts and the various sciences” (see https://en.wikipedia.org/wiki/Adapa#As_Oannes). 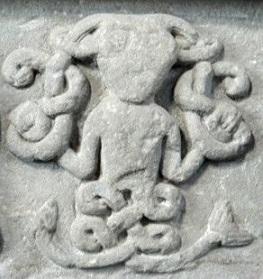 Cuba itself, has multiple cave systems. On my second trip to Varadero, I took the Matanzas city tour that included the Bellmar caves. This fascinating excursion took us past stalactites and stalagmites down to the shores of an underground lake.

From the blue holes of the Bahamas, to Sac Actun of Mexico to the Camuy River Cave Park of Puerto Rico, the seas and islands of the West Indies are full of hiding places and quite possibly, nesting spots.

A month later I was back in Cuba with snorkeling kit in hand. In the Havana airport, I met a young couple who soon became friends. “Carla and Carlos” (not their real names) were originally from Colombia but now living in Toronto.

My new friends met a man on the beach who sold us a “Cuba tour” that included snorkeling and points of interest. The tour guide was a honorable man who I will refer to as “C”. We were picked up by a good-natured driver in an old Ford; I will call him “Y”. Neither C or Y could speak English so I was dependent on my friends to translate.

“C” took us for breakfast but my gag reflex returned and I had to find a place to cough it up. It seemed an omen of bad things to come.

The 1950s car kept breaking down and we had to repeatedly give it a push to get started. “C” was noticeably embarrassed as was “Y”. It was clear “C” had spent a lot of time planning but had not anticipated such bad luck.

The tour took us across the narrow width of Cuba. We saw alligator and bird breeding stations as Cubans are active stewards of their natural environment. There was also a petting zoo with some very odd-looking creatures (don’t pet the alligators!).

On the final stretch of highway we saw a large number of graves to fallen soldiers. The array of monuments all looked alike and sadly reappeared at consistent intervals.

We ended up at a War museum featuring the Cuban perspective on the Bay of Pigs invasion. I was shocked to see the photos of Cuban soldiers in the conflict as many looked like teenagers – the sort of young, skinny guys you might expect to see in high school playing baseball or taking their girlfriends to movies.

Incredibly, it was where we ended up snorkeling; the Bay of Pigs! The Caribbean was unusually cold but I was soon immersed and looking into an underwater world. The visibility was good and my gag reflex was gone. Strange underwater plants grew in the Bay and colorful fish approached me. Despite the cold water, I didn’t want to return to shore and “C” had to shout to get everyone back.

From there, we went for a delicious seafood dinner and a generous helping of wine but the car trouble soon reappeared. On the way home over hills, valleys and winding roads, lamps flickered until the electric gave out altogether and the car was without headlights!

“C” was beyond consoling and “Y” looked up to the sky. 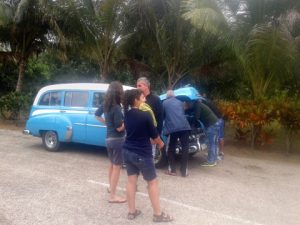 I felt for them. I have coordinated special events and know that nothing goes exactly as planned. They had put so much energy and hope into the tour and were truly proud of their country. Communist or not, they wanted to show us what the Cubans had accomplished. Car trouble aside, I think they did a good job.

It soon occurred to me that if we hit another car head-first, we would end up in the land of the dead! In the seats behind, the spirit of wine took over and the others weren’t so concerned. With each bump in the road they laughed themselves silly.

I suggested stopping at a farmhouse and calling for help but “Y” the driver couldn’t make out a word I was saying. He said something in Spanish, Carlos later interpreted:

“Ruski!”, he exclaimed. “Why did I take Ruski (Russian) in school, when I should have learned English?!”

My friends howled with delight as I stared into the darkness. Nevertheless, we made it back in one piece and after shaking “C” and “Y’s” hand, I went to my room and fell into deep sleep. 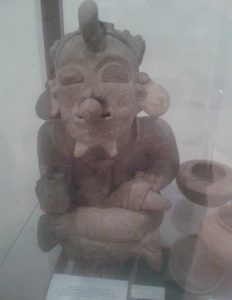 My friends told me of their Ayuausca experiences in the Colombian rain forest. Carlos was researching the drug for his Master’s thesis and Carla told me after taking the drug, a gigantic, much ‘larger than python’ snake slid and shook the forest and finally appeared in the clearing. It had the nerve to tell her to relax!

I wondered if the ancient Caribbeans spoke to intelligent reptilian or amphibious creatures while drug-taking. I thought of the amphibian and serpentine imagery in the archaeological museum and would later see more at the Montaine Museum of Anthropology in Havana and at the Mayan ruins of the Yucatan in Mexico (Another trip – see Exploring the Mysterious Mayan Coastline). 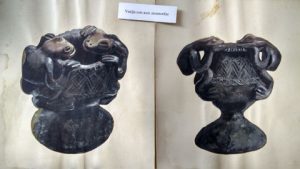 Amphibian cup. One of many artifacts in the Montaine Museum of Anthropology, Havana, Cuba

UF0s and paranormal activity can often seem dream-like. This is what UK researcher Jenny Randles calls “the Oz effect” with reference to the classic children’s story “The Wizard of Oz”. The Oz Effect is a sort of strange state of consciousness that coincides with the paranormal and can be likened to the awakening experience of the storie’s main character, a young girl named Dorothy. A native of Kansas, Dororthy’s home gets caught up in a spiraling vortex -a tornado – and she wakes up in the foreign and rather strange land of Oz.

Likewise, I mused the intelligent sea dwellers had evolved into interdimensional travelers that step in and out of our reality.

The “inter-dimensional” nature of alien creatures is found in stories by H.P. Lovecraft:

All of my stories, unconnected as they may be, are based on the fundamental lore or legend that this world was inhabited at one time by another race who in practicing black magic, lost their foothold and were expelled yet live on outside ever ready to take possession of this Earth again”.
– H.P. Lovecraft

I felt there was some thread to connect the underwater city to something extra-dimensional but couldn’t quite grasp where it might be. My next Cuban journey would prove illuminating (Continued in Part 4). -AJB