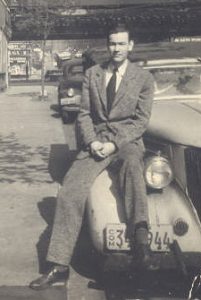 It seems to be a trend with Western stage magicians to try and prove there is no such thing as “real” magic. Harry Houdini exposed fake mediums and the Amazing Randi has “offered” a million dollar prize to anyone who can demonstrate paranormal powers to his satisfaction.

American amateur magician John Keel was also a debunker. As a child growing up in Hornell, New York, Keel became fascinated by Houdini and was soon impressing other kids with illusions and “magic” tricks. In earlier days, he dreamed of traveling the Orient and uncovering secrets of the magicians.

The young John Keel performs for the camera:

After military service in Germany, the 24-year-old Keel saved a little and embarked on what would be a 4-year quest, hoping to pay much of his way by writing adventure articles for magazines. 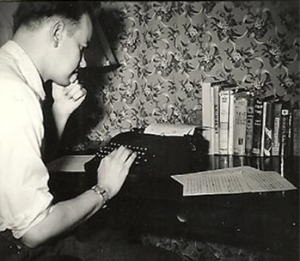 Money soon ran out and his agent had a hard time selling his work. Keel tried to find work in Egypt but without success.

His lovely German girlfriend came to stay for awhile but she was forced to choose between Keel and not starving to death. To say Keel went through a rough patch is an understatement but nonetheless his passion for magic and mystery only grew. 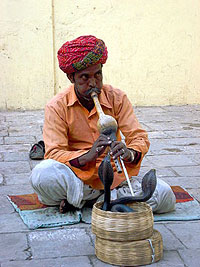 After interviewing, paying or observing street magicians in Egypt and India, Keel learned the secrets of snake charmers, x-ray eyes and methods for performing the Indian Rope Trick. He assumed there was a logical explanation behind it all but discovered there was a trick few debunking magicians ever master. The Indian who explained the rope trick enlightened the young man:

“Skepticism is blinding. Teach yourself to be curious, not skeptical. You will learn more because you will see more. You thought the rope trick was impossible. Now you know you can do it yourself. There are many things that seem impossible to us… but if you reach for your untapped resources, if you think with all your brain, you wil find the answers and more besides”.

Keel was a good writer and his agent eventually sold his articles back home. Each paycheck got him a little further on his way; from Cairo to Bagdad and then onto Bombay and the Himilayas. His experiences are collected in a work called Jadoo, a truly fascinating tale of a young man finding what many consider to be “impossible”.

The young writer went on to survive being buried alive for a half hour and seeing what looked like Yeti (the Asian Big Foot-like creatures) from a distance. Such things can be explained away as breath control or people wearing ape costumes but Keel also tells of how he came across experiences that exist outside of the “debunker” mind-set:

Fortunately for the young Keel, he did not consider himself an “authority on anything” and was open to a larger reality. 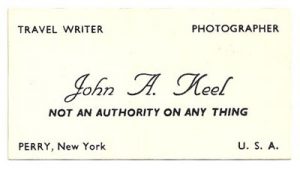 Keel also had a sense of humour – something every questor needs! Much later, UFO Hoaxer Gray Barker would give his first impression of Keel after meeting him in Point Pleasant, West Virginia:

…He was dressed in a corduroy hunting jacket, and gave the appearance of being long and lean with a promounced ‘writer’s stoop’ from years bent over a typewriter. Later I learned that, like many writers, he was a night person and usually had breakfast around 3 or 4 in the afternoon.

“I see you’re not wearing your black suit today,” he chided, and I knew I immediately liked Keel. Unlike many UFO investigators, he had a good sense of humor”.
(from the book “Silver Bridge”, 1970 by Gray Barker)

John Keel would go on to study UFOs and his investigations into the 1966 paranormal hotspot known as Point Pleasant, West Virginia formed the basis for his infamous book, ‘The Mothman Prophecies”. As an investigator in this case, Keel went through much emotional turmoil as he was given an ominous message there would be a tragedy on the Ohio River. He thought it might be a disaster involving the nearby chemical factory but in 1967 the Silver Bridge collapsed killing several people.

Actor Richard Gere plays Keel in a film adaptation and seeks assistance from a college professor in one scene. Keel felt these two were a good “composite” of his thinking during the investigations:

During the time of the “winged” Mothman and UFO sightings, Keel kept getting messages and phone calls from what seemed to be a “non-human” entity. Keel must have wondered if it was really just a friend, the hoaxer Gray Barker.

Barker later admitted there was a phone call to Keel on his phone bill but said he had no recollection of making the call. Keel might have suspected Gray Barker in this case but things got weirder still when the caller could tell the investigator what he was hiding in his shoe!

In a scene of the Mothman Prophecies movie, Gere is shown ripping the phone out of the wall but the phone keeps ringing anyway. This is based on what happened to Keel:

“At one point I got disgusted with the telephone and I pulled it out of the wall and the phone rang! So explain that… I was going around taking phones apart. In those days you could easily take them apart; with modern phones you need special tools. That little incident is in the movie”. (Interview with Art Bell on Coast to Coast AM, 2002).

Whatever was behind the weirdness, it seemed to have extra-dimensional powers. Like Jacques Valles, Keel saw a relationship between traditional supernatural phenomena and the UFO:

“According to Keel, he initially sought to explain UFOs as extraterrestrial visitations, but later abandoned this hypothesis. His third book, UFOs: Operation Trojan Horse, published in 1970, linked UFOs to supernatural concepts such as monsters, ghosts and demons. Keel used the term “ultraterrestrials” to describe UFO occupants he believed to be non-human entities capable of taking on whatever form they want.” (From Wikipedia. See Wikipedia on the Life and Career of John Keel )

Getting Back to Jadoo 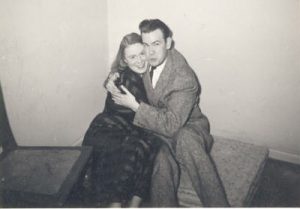 After travelling “the Orient”, Keel settled in Europe for awhile and wrote Jadoo. According to Colin Wilson (in his book “Alien Dawn”, page 161), John reunited with with his German lover Lite for awhile, to whom he dedicated the work. The chapter on his romance with Lite was originally deleted but is now in the re-published version.

Included in the book are other examples of Keel’s incredible luck – both good and bad. He tells us of narrowly escaping danger and how his demonstration of the Indian Rope trip to the press ended in disaster. Keel mentions playing russian roulette with an Iraqi rebel named Ali Baba (not the guy from Arabian Nights) and how he also lived among the Yezidi people, who are often called “Devil Worshippers”. He found them to be a peaceful people who mind their own business:

“…they were afraid of the devil and didn’t want to anger him. They knew about God and believed in Him. But they reasoned God was good and therefore harmless. It’s the devil they worried about”.

Indeed, the word “Jadoo” is a Hindi word for “black magic” but reading through Keel’s book is more of a positive experience. Keel traveled to some amazing and beautiful places until he was finally branded an “undesirable alien adventurer” at Singnapore and was shipped unceremoniously to Italy by British authorities who likely thought they were doing him a favor.

For a short time in the late fifties, Jadoo made John a celebrity interviewed on radio and television. Eventually, Keel would write several books, contributing important perspectives to the UFO field, and he would be instrumental in resurrecting the New York Fortean society. He wrote for television and as a journalist investigated “human interest” pieces for magazines. John was also a favorite on the lecture circuit before passing away at the age of 79. 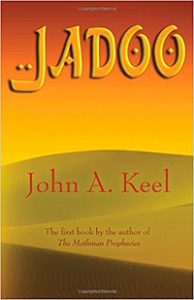 Jadoo, first published in 1957. Re-published in 2013 with previously deleted chapter and new appendices