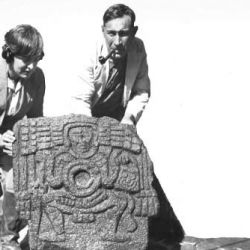 “When you are young and strong and full of hope, sit down one day and think about the world. Decide what you would like to do above all else and then go and do it. Follow your star to the bitter end no matter the hazards or the perils; no matter even if the star proves to be a false guide and you die in the attempt. You will have lived life to the full, you will have enjoyed yourself, and even if you leave behind no material treasure, you will leave riches in the hearts of those who have drawn strength from your strength and who will cherish your memory until their day is done”.
-FA Mitchell Hedges

Here’s the story of a person locked away in a work-school prison who dreams of exploring hidden worlds. His victory over the mundane is a fascinating tale and chronicled in the autobiography “Danger My Ally”:

Mitchell-Hedges grows up in the confines of Victorian society but longs to see the faraway and wild places. The soft domestic life of the Upper-class Englishman is not for him. FA’s Father tries his best to make the young man into a “respectable” banker but the boy keeps running away – first to the countryside, then to Artic ocean as a survey worker, then to the Americas where after being forced back to work like a slave time and again, finally makes his way to the wilds of Belize and Mexico. Mitchell-Hedges is repeatedly diverted from his quest as politics conspire, wars rage and numerous obstacles get in the way.

But resilience pays off and the rewards are beyond measure. FA Mitchell-Hedges was an adventurer and explorer who traveled to remote areas and found the pieces to puzzles, including the possibility of Atlantis. From battles with menacing sea creatures to hostile revolutionaries, he meets a lot of danger along the way; so much Michell-Hedges named his autobiography, “Danger My Ally”. 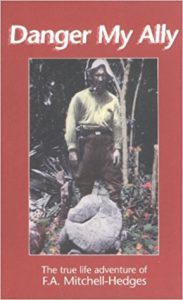 If there is one book you might read this year, let it be this autobiography! It is not only entertaining but illustrates how life is stranger than fiction. Of course, there are those who believe his stories are complete bullshit. Mitchell-Hedges was accused of being a self-promoting charlatan in his day but no one can deny he lived a life most could only dream and met a plethora of famous characters.

His interactions with bankers are worth the price of the book alone. Mitchell-Hedges learns earlier on how money, the very thing that funds our dreams can also become an addictive pursuit in itself, robbing one of their brief time on Earth.

Like many other controversial archeaologists and adventurers of his day, he also manages to get mixed up in the spy business.

A number of FA’s adventures were so incredible, I believe George Lucas might have used them as a source for his “Young Indiana Jones” TV series. Mitchell-Hedges interacts with Pancho Vila, Leon Trotsky and other historical figures, sometimes aiding their cause, sometimes not. In any case, Mitchell-Hedge’s generation of adventurers and explorers were an influence on the Indiana Jones character.

The Indiana Jones and the Crystal Skull movie references Mitchell-Hedges by name as he is associated with one of the most famous artifacts. “How it came into my possession, I have reason for not revealing”, FA says and calls it “the skull of doom”. His daughter Anna claims to have found it on her birthday amongst ancient ruins but we can’t be sure.

The story of Anna Mitchell-Hedges is fascinating in its own right but we see another side to the adventure hero when it comes to his daughter. As hard a person he becomes, FA manages to keep his humanity alive. It was Anna’s fondness for her Father along with the enthusiasm of fine adventure and alternative literature connoisseur Jim Honey that allowed this book to be re-published.

Jim met Anna Mitchell-Hedges in 1989 and journeyed with her to Belize in the 1990s to re-visit the ruins her father assisted in excavating at Lubaantun. He traveled to the Smithsonian to visit the artifacts found by FA.

In a lecture pamphlet Jim Honey says, “from the very first time I met Anna I felt there was a story here, so much deeper and more mysterious, that it is unfortunate that it has been shrouded by the attention and controversy surrounding the crystal skull. FA had a message for us all. A message which he professed loudly and lived. He put it into words in Danger My Ally on page 254 and I quote, ‘life which is lived without zeal and adventure, is not life at all‘.”

Among the many quests of Mitchell-Hedges, the civilization of Atlantis was central. At the end of the 19th century, there was speculation of a parent civilization to Egypt, Mesopotamia and Mesoamerica and many believed this was Atlantis. It seems Mitchell-Hedges thought the answer lies within the Caribbean – Central American area. This idea is echoed today by researchers such as Andrew Collins (today some researches prefer to refer to it as “Civilization X” rather than the term “Atlantis”, which has become associated with much new age nonsense).

In the book, Mitchell-Hedges dedicates a chapter to “the Outposts of Atlantis”. He describes climbing cliffs in Roatan (an island off the coast of the Honduras) to reach high dwelling caves. Here, FA finds artifacts buried in the cave floor including painted pottery, stone implements, obsidian knives, jade and jadeite figurines. Such encounters were repeated in places such as the summit area of Barbarat. These finds led Mitchell-Hedges to consider the possibility that the survivors of Atlantis might have sought refuge in higher ground areas and caves well above sea level.

Throughout his explorations in the Bay Islands and Central America, Mitchell-Hedges finds artifacts that do not resemble those of major groups such as the Maya. Many of these are now hidden away in the vaults of the Smithsonian and probably ignored by the many newer, younger archaeologists who are focused on studying the more well-known cultures. George Heye of the Museum of the American Indian, however, valued Mitchell-Hedges contributions and wrote a letter of thanks. Here’s an excerpt:

“Your own observations, and the United States Government surveys in Nicaragua, prove conclusively that at some remote period a tremendous earth movement of cataclysmic force must have taken place in that part of the world, And there is little doubt by the data you have supplied and the specimens you returned with from your last expedition that these islands must have been part of the original mainland, and that your excavations have actually unearthed the cultural artifacts of a prehistoric people that existed prior to the great earth movement… Your discoveries open up an entirely new vista in regard to the ancient civilizations of the American continent”.
– George Gustav Heye, November 5, 1934 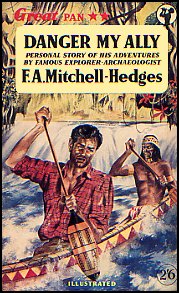 In Danger My Ally, you will read of daring raids, dugout canoe trips and fights with monstrous creatures. You will read of nightmare journeys through steamy jungles and excavations of unusual ruins and artifacts. You will learn how the politics and spying of the early twentieth century created danger at every turn and you will entertain the possibility of lost cities and civilizations. Most importantly, the reader will see all of this through the eyes of the seasoned and unapologizing explorer.

More reasonably priced copies of Danger My Ally can be purchased at:

or via Internet at https://www.adventuresunlimitedpress.com for US & International.